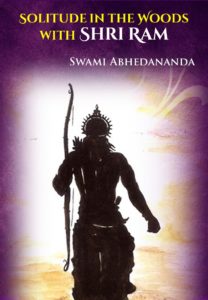 Solitude in the woods with Shri Ram

Undoubtedly Lord Ram is the most venerated and admired character in Hindu philosophy. Despite being born as a royal prince in the most affluent kingdom, and even after being the most powerful, sought after and qualified ruler of his times; he had the depth of character, the ocean of humility and the limitless compassion that endeared him to everyone. Even when he was banished from the kingdom and exiled for fourteen years by his step-mother Kaikeyi, he accepted the command of his parents as a privilege for him to fulfill as their son. With a beaming smile and absolute composure on his face, Shri Ram left for the forest along with his wife Devi Sita and his brother Shri Lakshman. Even in his exile, he saw an opportunity for satsang to revel in the divine company of great saints and sages living in the forests.

This portion of Lord Shri Ram’s wandering in the forests and his interactions with saints and sages is described extensively by Goswami Tulasidas Ji as “Aranya Kand” in his masterpiece composition Shri Ramcharitmanas. We are pleased to share with you some inspirational snippets and thought provoking points from Swami Abhedanandaji’s talks.

© 2020 Chinmaya Mission of South Africa. All rights reserved. Read our Terms of Use.

You can find out more about which cookies we are using or switch them off in settings.

This website uses cookies so that we can provide you with the best user experience possible. Cookie information is stored in your browser and performs functions such as recognising you when you return to our website and helping our team to understand which sections of the website you find most interesting and useful.

Strictly Necessary Cookie should be enabled at all times so that we can save your preferences for cookie settings.

If you disable this cookie, we will not be able to save your preferences. This means that every time you visit this website you will need to enable or disable cookies again.